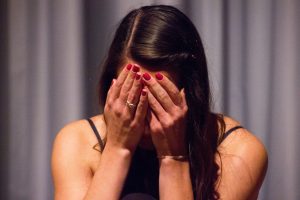 To be guilty means that one is responsible for doing something wrong. When a person says he feels guilty, he is saying he is experiencing an emotion akin to sadness, disappointment with oneself, and a sense of shame.

Actual guilt has to do with facts. You did something that hurt another person physically or emotionally; or you destroyed property or violated a law or one of our accepted moral and ethical beliefs. Guilt can apply to an illegal act as well as to an immoral act. If you steal and are caught, you are found guilty. However, in some moral traditions, if you walk by a drowning person and decline to help, even though you can swim, you are still guilty, whether that refusal to help is against the law or not. If a person does wrong and has a conscience, such a person will feel a sense of shame. This is normal and it is healthy. The hope is that the feeling will motivate the person to make amends, to apologize and to make restitution, if possible.

In addition to actual guilt, consider the possibility of a guilt that is not justified by facts. We call this ‘false guilt’. False guilt is an emotion that one feels if one believes that she did something wrong, only because she has been programmed to think of herself as a habitual wrong-doer or that she is stupid or bad. When this false guilt becomes prominent in a person’s mind and heart, a permanent sense of shame can set in. This is an unhealthy kind of shame, because it can lead to depression, self-criticism and even self-hatred, which in turn can result in feeling hopeless, unmotivated and apathetic. The person self-isolates and feels disconnected from others and can eventually lose the desire to live.

The problem is that making one’s way out of such a dark place can seem impossible. The person who feels trapped there may not even imagine that he could be happy. He can feel cursed and doomed.

The good news is that reversing the negative programming which makes a person feel ongoing shame is possible. We are confident of this because we know people who have done it. If that were not the case, the mental health profession might have disappeared long ago. We also know that some conditions need to be met in order for the change to begin. First, the person must be able and willing to envision the possibility of a new life. Then, she must begin to believe that she can have this new life, that she has the ability to make one small change in her behavior and attitude. Then she must be patient, persistent and determined, believing that it will be worth the effort.

If a person expects something outside himself – like a medication, for example or some great spiritual leader – to do it for him, he may be sorely disappointed. In fact any person who is struggling with an emotional issue will do much better when she accepts the proposition that she must be actively, vigorously involved in getting well. That means challenging old beliefs, attitudes and habits, and possibly changing one’s social life and connecting with people who will help him on the road to wellness.