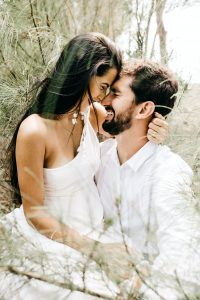 A common problem in the lives of heterosexual couples is that women are frustrated because their husbands or boyfriends only talk with them about basic matters. Why should women be upset by this? After all, there are many more important things to be concerned about; aging parents, money, health, the kids’ education and so on. And yet, when the man can not, or will not talk to the woman, no matter how trivial the subject matter might be, she often feels neglected and alone. If this goes on for too long a time, she may become so sad and angry that she no longer loves him and she may want out. I have seen this time and again in my therapy practice.

Years ago, I met with a couple; call them Jack and Jill. Married for thirty-five years, children grown up and gone, Jill was feeling depressed and lonely, because Jack never talked to her. He was an engineer employed at a large power company, and he wasn’t much of a talker, unless the topic was sports. His daily routine consisted of going to work, coming home, some little chit-chat with his wife, and then watching television. They had no conversation and no meaningful interaction. Through the years Jill would occasionally get very upset, even yelling at him, which made him think he’d better do something quickly. So, off he would go to the florist in a desperate attempt to appease her. But the calming effect was always short-lived, and soon afterward the pattern would start up again. And so it went for decades. Eventually she had had enough and wanted to divorce, saying, “What’s the point of living with a roommate?”

How might people get into this kind of pickle? Can’t a woman tell – before committing to a relationship – that her boyfriend is not a talker? Can’t she see that this could become a problem? What stops her from noticing or caring about this? If she notices his reticence, does she imagine that he will change after they have children? Well, for one thing, she may have come from a chaotic, noisy family, and being with a quiet, gentle man gives her a sense of relief. Thus, she does not anticipate that in the future he might bore her to tears, and that she might end up feeling neglected and lonely. Maybe he is the first honest and well-employed man she’s ever known, and because of that she feels secure with him. Regardless of the explanation, a woman in this unhappy situation will be wondering what to do, and whether she has any good options.

Should she just grin and bear it? Should she look for other chances to have the conversations she craves? How about getting into a group of women with common interests? She might find that this satisfies her need for bonding through conversation, and she might not feel so empty when she’s with her husband. Or, could she consider taking the initiative to jump start conversation with him? There are ways to do this.

If you’re a heterosexual male, and you are in a relationship, please hear this. She needs you to talk to her. The subject matte is irrelevant. Admittedly, this may require you to step out of your comfort zone. And if your thoughts about conversation are along the lines of, “I don’t like small talk”, forget about it. Such a statement reflects nothing more than arrogance and pride. “I don’t like small talk” has an embedded meaning which is something like the following: I am a deep thinker, a serious person, and I don’t waste words talking with silly people about insignificant nonsense. If that core belief prevents you from bonding with her, you may live to regret it. On the other hand, if the relationship matters to you, you might find the courage to challenge that tired old statement (I don’t like small talk) and re-think your self-importance.

Once again, it is the act of talking – not necessarily the subject matter – that matters to a woman. For some reason, unknown to this writer, conversation makes women feel connected and safe.

Here’s a call to action just for you guys out there. Men can learn the social skill of conversation. If you’re having a relationship problem that relates to an inability to talk, and you’d like to do something about it, consider reading a book or listening to an audio book in order to learn how to converse. If you’d prefer to take this project on with the help of a professional, that might work even better for you. If so, I am confident that we could get this done, and that, as a result, your quality of life could improve dramatically. I can be reached at (219) 309-3928. It would be an honor to be of assistance.