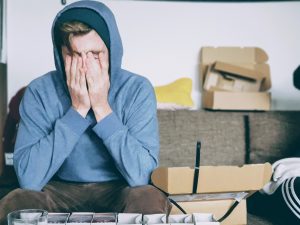 It has been said that poor people plan their lives one day at a time, while rich people plan in terms of decades.

One very common thread that appears to run through people’s problems is that life stressors can force any individual to focus only on his current discomfort or pain. Now, certainly, in the event of a health crisis, that focus is reasonable. In such an instance one should not be expected to do anything other than to recover. Even so, some people are able to maintain hope by recalling the overall meaning and purpose of their lives. As wise doctors know – cancer doctors, especially – a positive attitude is so important to regaining good health.

However, in cases of severe emotional stress, if one should feel unable to cope, the big picture is likely to disappear, and problems can ensue: anxiety, depression, bitterness and hopelessness.

A fifty year-old female client is extremely unhappy, anxious and feels desperate. She has not prepared herself to be self-reliant. But she is not to blame. In early childhood she was molested by several family members, she was not protected by her mother, and ultimately came to believe she was nothing but a victim, to be used and abused by men. She became utterly dependent on having someone ‘save’ her and protect her. This worked out for many years, but only until her husband, a good man, suddenly died. Uneducated and with little earning power, she is now dependent upon a man who belittles her trauma issues and takes her neurotic behavior personally. She is completely confused. In one moment she says, “I do love him.” And in the next moment she says, “I’d like to tell him to get f**ked.” She tells me that, if they break up, “I’m screwed”, because she cannot afford to live on her own.

The complex trauma she suffered has made her unable to imagine a big picture for her life. Now the question is this: can she learn to think that way? Can she realize that she is a person with value and that she has the inner resources to take responsibility for herself? Can she ‘rewire’ her thinking so that she no longer believes herself to be put on this earth for one reason; that is, to be abused.

History has proved clearly that people have, indeed, recovered from severe emotional trauma, and have gone on to live independently, no longer laboring under the illusion that another person can, or should, save them.

Have you noticed that you can feel stuck in a moment of severe stress, and that losing sight of the big picture is making life feel burdensome? If so, it may be time to step back and take a breath. Try looking at your situation as if you were someone else, observing it from a distance. If you could advise the ‘you’ who is stuck in the problem, what would you say? Take stock of where you’ve been in life, and where you’d like to be several years into the future. Focus on the big picture of your life.

Some people can work through this on their own, while others prefer to do this work in conversation with another. If you prefer the latter option, please feel free to reach out by calling (219) 309-3928. I’d be honored to be of service.

For more thoughts, click here STRESS AND YOUR HEALTH.