To Catch a Monkey 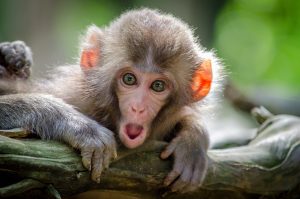 There is an old story that originates from the other side of the world, about a foolproof method for capturing monkeys.

Here’s how it goes. After many failed attempts at capturing monkeys, a band of hunters hit upon a creative idea: they built several heavy little wooden boxes. In the top of each box, they bored a hole just large enough so that a monkey could insert its paw. Into each box they placed a nut which was a special favorite of the monkeys.

After setting the boxes in a clearing under the clump of tall trees where the monkeys lived, the men hid in the bushes and waited. Soon, the monkeys came down to examine the boxes, handling them, smelling them. Finding that there was a nut in each box, they reached inside and grabbed the nut in their little fists. But there was a problem. When they tried to withdraw their paws while holding the nut in their fists, none of the monkeys was able to get its paw out of the box – the little fist, grasping the nut tightly, was too large to pass through the hole.

At about this time, the men came out of hiding and converged on the monkeys. The monkeys  shrieked and scrambled about as if they could escape. But as easy as it might have been, none of them was able to let go of their yummy treats; and so they were easily captured.

This story is frequently used to illustrate the cost of not letting go when holding on is bound to end badly. One of the implications in the story is that the monkey would be free, if only he ‘chose’ to let go. That is a fallacy. The monkey fails to let go, not because he refuses to let go, but because he is unable to do so. He cannot let go, because he is in panic mode. His brain is not capable of sensing the real danger; it has become overcome with terror.

If a person is frozen with fear, is he or she any more able to cope than a monkey can? Does that question come as a surprise? The fact is that, like monkeys, a human being can experience the panic reaction, which we call the “fight-flight-freeze” reaction, or the “stress response.” In that mind-body state, no one can reason well enough to solve a problem.

If, on the other hand, we are able to keep our wits about us and realize the difference between what we want, versus what’s in our best interest, we are less likely to suffer. About twenty years ago, there was a popular crime film, called Heat, which starred Robert De Niro as a master thief, who, with his tech-savvy gang, uses computers and other equipment to pull off huge heists. Al Pacino plays the cop who is after him. Before the big theft begins, De Niro’s character tells his crew that the operation is high risk, and it can abort at any moment, even right up to the last second, on his command. The bad guys break into the target building, and are just about ready to make the final move to capture their prize, when the gang leader, sensing something is amiss, contacts all the other gangsters instantly, and says, “Abort! Everybody out! Now!!!”

The gangster boss’s keen sense of danger and good judgment keeps him alert to the genuine threat, so that he is willing and able to let go – to give up something valuable, which he very much desires  –  knowing that, if he doesn’t give it up, he will die or end up in prison.

Unfortunately, that kind of presence of mind is not common when people are under stress. Fear can blind even a smart person to the fact that holding on to “the nut” is a bad option. It can happen to anyone, possibly even you. If you’re wondering whether you’ve been holding on to something that’s bad for you – an old grudge, a bad relationship, a lousy job – because you’re in the grip of some kind of fear or anxiety, you might benefit from professional help. If that is the case, please reach out. I’d be honored to be of service. The phone number is (219) 309-3928.