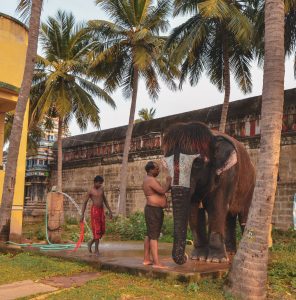 In Eastern Asia, elephants are trained to be beasts of burden, just as mules and oxen are in the west. From a young age, baby elephants are fitted with an ankle cuff, attached to a chain, which is attached to a post in the ground. The little elephant can move no further than the length of the chain. The only time it’s allowed to walk any further is with the help and direction of a trainer.

This goes on through adulthood, with the elephant becoming completely dependent, obedient and submissive to humans. The elephant cannot break free. It never occurs to the elephant at any time during this long training period to sense, “Hey, wait a minute! I don’t like this. I want to be free. I’m strong, now. I could break this chain, and they can’t stop me.”

You may know someone who has been just as thoroughly brainwashed. That is, conditioned to believe that he or she has no power, no strength, no knowledge and, thus, no capacity to be free, and is utterly dependent on some other person, persons, or group, in order to get his or her needs met.

How is it that human beings, who ought to be smarter than elephants, can allow themselves to be manipulated like this? While this is too big a question to be covered in a short article, let’s be foolish and take a stab at it, anyway.

First, it’s possible that the person who’s been conditioned to be powerless has temporarily lost the ability to see that she has options. Somewhat like the baby elephant, who walks round and round, loaded with cargo, sometimes carrying a rider,  and can’t see beyond the foliage around the circle. Even as years go by, the elephant has no idea there’s anything beyond the trees and bushes. Not knowing that there’s a whole world out there, the baby just stays in the circle, month after month, content to be taken care of and to do as he is told. So does the human being who’s developed a dependent personality.

Secondly — applying this to people, not elephants — it’s possible that this kind of daily intensive training erases one’s curiosity about the world around him. He loses interest in the world, and lacks energy and the motivation to do anything that could be rewarding or creative.

Thirdly, the person who’s been conditioned to be dependent learns nothing, except what the manipulator wants her to learn. She does not develop skills that could help her be free. The thought of being on her own never even enters her head. It’s astonishing!

Finally, he develops a very small comfort zone. Outside the comfort zone lies the unknown, which is scary. So, even though he’s a slave, he’d rather stay put, because what’s out there could be worse.

Can this change? Yes, it can. Anyone who’s been victimized like this can find relief and freedom. But the victim must be willing to challenge his or her long-held beliefs. When the victim is prepared to do that, believes that change is possible, and that it’s worth the risk, she has already taken the first step.

← Dump Your Garbage
A Flexible Mind →