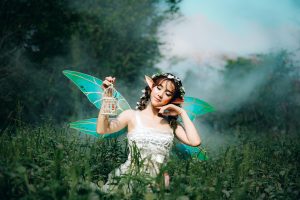 We, the members of the human race, have always loved stories. In fact, the people of every culture, going as far back as we care to go, have created myths and legends about good guys and bad guys, gods, monsters and natural disasters, monumental battles and acts of incredible courage. These stories are part of who we are. We love them, and in a way, we need them.

Some of these stories are believed to be true – the Great Flood, for example. Other stories are understood to be symbolic, while others are considered mere fantasy.

Now, some people are strongly drawn to fantasy, even, at times, preferring fantasy to reality. Why would that be so? Are they uncomfortable with reality? Has life been so hard, that they are happier retreating into a fantasy world? It’s complicated, and no two people are exactly alike.

The thing is, there’s nothing inherently bad about fantasy. The problem comes in when we use it to deny what’s really happening, and to avoid taking care of business. I know of more than one marriage that has been damaged because the husband would not spend time with his wife and kids. Instead, he spent all his down time on his phone or playing video games.

Rather than dwelling on the ‘why’ of it, let’s just look at the potential consequences when a person cannot tolerate a hard reality and escapes into fantasy.

About a year ago, a young gentleman, married with children, came for help. He admitted to  behaving badly, and he was unhappy in his work as a commissioned salesman in high tech. He said that he had begun staying up late at night, long after the rest of the family had gone to bed. While they slept, he was on his computer, using Facebook to communicate with some ‘woman’ he did not know. He flirted with her, presenting to her a false name and profile – his fantasy personality. Unfortunately (or fortunately) his wife found out about it, and she was crushed. She didn’t know if he’d fallen in love with her … it was sad. He felt humiliated, guilty, and he needed to repair the damage he had done. After a few sessions, the reason for his obsession with the Facebook fantasy became clear. Having had many years of success as a salesman, he’d been moved to a separate department, where his performance plummeted. He was making much less money, and he felt like a failure. He couldn’t face himself. It was for this reason that he felt compelled to run away: to create a fake personality and interact with a fantasy figure. It helped him feel special. Thankfully,  because his wife found out, he was strongly motivated to resolve the problem. Working closely with me, he succeeded. He found renewed success at work and no longer needed a fantasy in order to boost his self-worth.

The fantasy business has become a huge commercial enterprise; an enormous portion of our population – adults as well as kids –  use fantasy as their go-to strategy for amusement and for alleviating boredom. Used in moderation, it’s no problem. But, like anything, if it’s overdone, or it becomes a crutch, like drugs and alcohol, it can ruin a life.

If you are wondering whether an attraction to fantasy has created a problem for you, consider getting informed about it. It might even be a good idea to talk to a professional. If you would consider that option, I’d be honored to be of service. The phone number is (219) 309-3928.