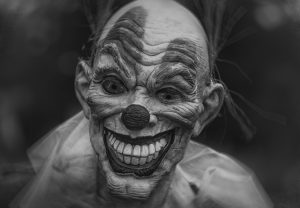 As we move through the COVID-19 pandemic, hardly a day goes by without some public mention of masks.

You are hereby invited to take a minute to think about masks in general; not just as an item of personal protection, but as something that has been used in many ways.

Masks have always held a particular fascination for people, and have been a cultural feature throughout the history of the world. Masks were used in the theatre of ancient Greece. Centuries later masks were a common costume garment in European pantomimes and comic sketches. Masks have appeared in the tribal rituals of native people all around the globe from Africa to North America and beyond. In fact mask making was a specific art, as it is today, for specialized kinds of entertainment … not to mention Halloween and masked balls.

Now, what if we were to take this conversation into a different direction? That is, into the realm of human behavior. Excellent! Now, it is interesting to note that people use masking as a way to deal with their problems … mainly as a way to hide their true feelings, thoughts and motives … ultimately, their true selves. Some people have learned to mask themselves from their youth, and having had so many years of practice, they have become experts at fooling people. And in some cases, even fooling themselves.

One of the greatest theatre artists of the 20th century was the brilliant mime, Marcel Marceau. In addition to his classic comic sketches, Marceau created little stories on serious themes. One of his most famous routines was called, “The Mask Maker”. In it he presented the idea that the mask maker could easily and quickly put on any mask he wished, in order to make an impression on other people. Marceau did this by manipulating his face into a series of exaggerated expressions, one after another. He pulled off one ‘mask’, and put on another, instantly. He showed how easy and how amusing it was to take on one expression after another, going fluidly from happy mask to mischievous mask; then to angry mask, sad mask, jealous mask, and so on. Marceau himself explained that we all have the tendency, at times, to hide our true selves behind some kind of false front. As we watch “The Mask Maker” story unfold, our reactions go from delight to thoughtfulness. The routine ends on a touching and sad note, when, after putting on the happy mask – a grossly exaggerated grin – he finds that he cannot take it off.  Struggle as might, the mask will not come off. It is firmly fixed on his face. Physically exhausted and mentally drained, he sinks to the floor in despair, trying desperately to cry… but the mask will not allow it. He is trapped forever by his own cleverness.