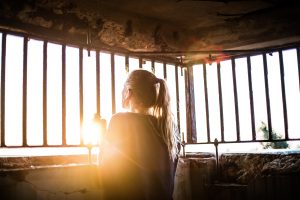 A wise teacher once told me, “People often experience suffering because they believe, rightly or wrongly, that they are out of options.”

In a previous blog post I wrote about dependency, and that a relationship of extreme inequality – one person more dependent than the other – leads to suffering for the person who lacks power, choices and freedom. Sadly, so many people, unable to anticipate the cost of being dependent, fail to prepare themselves for a life of self-reliance. They may have hated school, and continue to dislike education. They reject the idea that, as adults, they could do better at learning. Consequently, they may never learn a skill that will earn them a decent living. Thus, they become dependent on a spouse, boyfriend, a company or the government.

These people often end up feeling trapped, stuck or backed into a corner. They have no room to move. They are at the mercy of others.

No one should have to go through life feeling like a prisoner. No one should be deprived of the liberty to make changes, when a situation becomes impossible. And yet, even in this day and age of so-called equality for all people, regardless of sex, race, ethnicity, etc., many people are living that nightmare.

People who are not gifted with average or higher intelligence may never be big earners, and may require help throughout their lives. That is a separate issue, and such people should be cared for. However, for people who are able to learn, and who can think clearly, the lack of maneuverability is partly a problem of their own making. Typically, the problem is a problem of vision. They don’t see that ‘the failure to prepare prepares us to fail.’ The refusal to become self-reliant may be rooted in fears generated by early childhood traumatic events. Such events were perpetrated by others, and in no way caused by the victim. Even so, the fact remains that the victim must take responsibility to find healing and resolution. If the victim does not do so, he is responsible for the problem’s continuation.

Many of my clients report that their unhappiness is connected to a lack of freedom, limited options, and a sense of failure and shame. They may blame themselves for the mess they’re in; that particularly nasty form of self-abuse further complicates their distress.

If you feel that you don’t have room to move, are feeling stuck or trapped, and you’d really like to do something about it, please call 219-309-3928. Solutions to these problems do exist. I’d be honored to work with you.