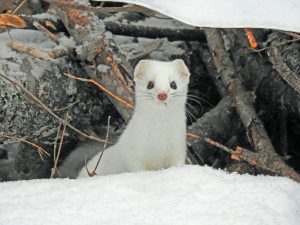 Our language is full of colorful idioms in which animal characteristics are used to describe people: blind as a bat, stubborn as a mule, strong as an ox. Owls symbolize wisdom, lions represent courage, dogs are loyal and snakes are evil. Interestingly, in other cultures, animal symbols can be viewed differently. For example in parts of the far east, snakes represent wisdom; and in parts of the middle east, dogs are considered vermin.

But getting back to our culture … consider the weasel. Weasels have always had the reputation of being sneaky. In rural America, they have been known to raid chicken coops and steal eggs from nests. And they get away with their little crimes, because they are clever enough to ‘weasel’ their way out of trouble. Consequently, the weasel metaphor refers to people who know how to wriggle out of tight situations and how to manipulate people, thus avoiding responsibility and consequences. When they are put to the test, they speak in vague terms – weasel words – that could be construed in several ways. They refuse to be pinned down.

The purpose of this article is to highlight just a few ways that people use weasel words in relationships. Let’s take a look at a handful of them, so that when you hear them, you will know it’s time to be on your guard.

‘I want to be with you.’ – This is used by men who will never commit to marriage. They imply that they are committed to you, without being definite. What does this mean, this phrase “to be with you?!” It’s nonsense.

‘I want to figure out if we’re supposed to be together.’ – The male member of one couple who came for counseling stated these exact words as his reason for being in couples therapy with his girlfriend. This stinks so badly, you can practically smell the weasel’s odor all over it.

‘I don’t know if I want to have kids with you.’ – If you’re hearing this from your spouse or partner, think hard, especially if it goes on and on.

‘That stupid thing I had with the other woman didn’t mean anything… it had nothing to do with our marriage.’ – Can you interpret the meaning of this statement? I can’t.

‘It depends.’ – If, after a lot of dating and romance, you’re thinking about marrying, don’t accept this kind of answer to an important question such as: ‘If we had kids, would you believe in spanking?’ Or, ‘If my mom or dad got old and sick, would you be okay if they lived with us, rather than in a nursing home?’ – These important questions demand definite answers instead of, ‘it depends.’

This is just the tip of the iceberg. The bottom line is that you will benefit greatly if you’re able to spot weasel words, as well as other kinds of manipulations. If you’d like to know more about how to do that, please give me a call. The phone number is 219-309-3928. I’d be honored to be of assistance.

For more thoughts on the use of words, click here. Communication.