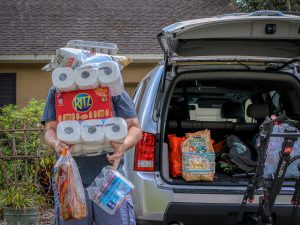 Over one hundred years ago, America’s most famous multi-millionaire, John D. Rockefeller, was asked, “How much money is enough for you?” His answer was, “Just one more dollar.”

A current client is grappling with a troubling issue. He confesses that, no matter how much he possesses, he always wants more. In his words, his life is a life of “excess”. He overeats, works long hours and spends too much money on unnecessary items.

As a result, he has become morbidly obese, and, even after aggressive surgery to force him to reduce food intake, he is still obese. He is anxious about not having enough money to take care of his family, even though he is a highly paid professional. Because he works so much, he hardly has time for his wife and children.

His life has unfolded this way, driven by the gnawing feeling in his gut that, no matter how he tries, he might never have enough. As his therapist, I wondered aloud how this happened. Was he born that way? That is, does he have the brain of an addict, which contains no “Off” switch?  Or, did life events lead him to adopt a whole slew of compulsive thoughts and behaviors?

As he we talked, he told me about his early life. His large extended family had suffered many losses and deaths. His father, who drank heavily, died at the age of thirty-nine, and h, having no life insurance, his mother had to scramble in order to support the family. Even before my client was born, his mother’s brother had died in his twenties, the victim of a workplace accident. Furthermore, my client had witnessed the passing of numerous uncles and aunts as well as his grandparents.

At one point, he gave me a lovely gift: an insight into the working of his mind. He said, “Whenever I know I’m about to get a big paycheck or a bonus check, my first thought is, ‘How am I going to spend that money?’” We talked about that one aspect of the “never enough” problem, and determined that might be a useful starting point towards helping him recondition his thinking. That is to say, to retrain his mind to deliberately generate a different thought, other than, “How can I spend that money?”

This concept – the idea of ‘re-wiring the brain’ –  is one proven-effective way to approach many of life’s problems. Our thoughts and beliefs are closely connected to our actions and emotions. And the good news is that anyone who can think clearly can retrain himself/herself to use the mind effectively to change bad habits, which in turn can improve mood and create happy feelings.

If you have been trying to work through a personal problem and you’d like to learn about this, please feel free to call (219) 309-3928. I’d be honored to be of service.

For further thoughts click here The Mother of Emotions.