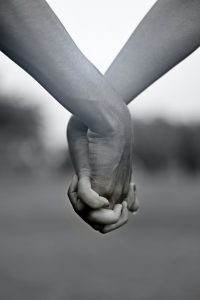 You remember the old story of the “Three Little Pigs”. They each built a house. The first little pig built his house of straw, the second built it with sticks, but the third house was made of bricks: bricks are always cemented together with mortar. The brick house was the only one that was left standing after the wolf huffed and puffed.

What makes people stick together in a relationship? Is it the promise they made? Is it pleasure? Common interests? Is it for the sake of he children?  Is it money? Is it insecurity or the fear of being alone? Fear of being yet another statistic? Fear of humiliation and failure? It is obvious that merely being married is no guarantee of relationship success. And so marriage is now subject to criticism. In fact at least one American sub-culture mocks marriage openly..

Challenges to the value of the marriage contract go back into the 19th century, but they really took hold in the 1970s, when celebrities made living together (co-habitation) fashionable. Some of the rich and famous were heard to say things such as, “We don’t need a piece of paper to prove our love. Our relationship is more solid than a marriage, because we do not need a legal document to keep us together. We stay together because we want to stay together.” You can imagine their smug expressions and hear the mutually congratulatory back-slapping.

For those who eventually plan to marry, too many of them believe that living together before marrying makes divorce less likely. This is unfortunate, because no such evidence exists. Numerous studies on this question contradict one another. Therefore, there is only one reasonable conclusion: living together does NOT make divorce less likely. And yet about 60% of couples co-habit before marrying. It’s like, you know … a test drive.

But suppose the couple does not marry. They have taken no vow, and had no ceremony. Usually, it’s just two people deciding to be a couple. In that case, what is the bond that will hold them together? Do they assume that their loving feelings will conquer all? How will they react when the storms of conflict and adversity come along?

I put this question to my couples therapy clients, married or not. If you overheard their comments, you’d be surprised that many of them cannot answer that question. In many cases it never occurred to them to talk about such things.

Are you in a relationship in which you are not sure what is keeping you together? Do you and your significant other ever address that question? If not, it may not matter whether you do or don’t, as long as the relationship is strong and based on correct moral and ethical grounds. Still, how do you think you would handle a big problem together?

If you are wondering whether the bond of your relationship needs strengthening, and you’re not sure how to go about it, you may want to consult a professional. If so, please feel free to call. The number is (219) 309-3928. I’d be honored to be of service.

← Beyond Limitations
Learning from Mistakes →