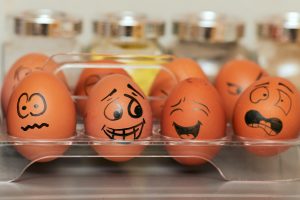 The inability to express one’s feelings and to talk about one’s difficult experiences can create problems which will not merely fade away. As one writer put it, “Emotions are not biodegradable.”

Two clients, a married couple – call them Jack and Jill – are suffering because their marriage is in crisis. Jack had an affair. Later, Jill also had an affair. His affair ended a couple of years ago. But her affair goes on, and she refuses to give it up. She says she has lost that loving feeling for her husband, and is in love with her affair partner. Jill shows no emotion, and says that she sees no way to stay married to Jack. As his head hangs down, Jack says he feels like a criminal facing the judge who is pronouncing a harsh sentence.

In a recent session, one of the first things she said about herself was, “I’m not a good communicator.” She said that her response to hearing about his affair over two years ago, was to set it aside and try to move on.

Now, just think about this for a second. Can you imagine what you would feel emotionally if your spouse cheated on you? Could you think clearly? Would you know how to express your feelings? Would you be wise enough to know that this was a threat to your marriage? If so, would you be able to talk through this? Would you be honest and brave enough to seek outside help?

Due to Jill’s failure to express her feelings, Jack said he thought she had forgiven him, and he was off the hook. Thus, Jack and Jill never addressed the damage he had done. They never even considered getting help.

As you probably know, some forms of cancer can grow while the patient feels no symptoms. In the same way, the emotional pain was growing inside her, but she was not able to identify, much less express the pain he had caused her.

Consequently, Jill’s response to Jack’s infidelity did not come right away. In fact two years passed before she struck up a friendship with the man with whom she later fell in love.

If only she had not believed herself to be a bad communicator, she might have tried to tell him that she was hurting. If she knew that cheaters are only looking for one thing after they are found out: to be let off easily. If she could predict how she would eventually react – by having an affair of her own – maybe all this could have been avoided and the marriage could have been saved. But, unfortunately now, she says she’s not interested.

There are many reasons that people find it hard to express themselves. A number of them are mentioned in my blog post Communication. If you think you have room for improvement in this area, you’ll find this quite informative.

Further, if that is the case, and you’d like to receive professional coaching, please reach out. The phone number is (219) 309-3928. I’d be honored to be of service.