Ashley was thrilled to show her husband, Jason, her new yellow dress, but was worried that the dress made her look fat. Even so, she took a chance, she put it on, modeled it for Jason and asked, “Do I look fat in this?”

He replied, “Not as fat as you look in the red one.”

When Jason woke up in the emergency room, Ashley stood at the foot of the bed, wearing the red dress. As he slowly 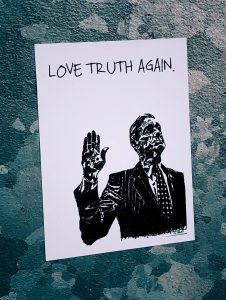 opened his eyes and peered through the bandages, she asked, “Do I look fat in this?”

Jack and Jill have come to me for couples therapy. Jack was unhappily married for many years, and so was Jill. They both have children from their first marriages. Jack and Jill have been dating for over one year. They still live separately, and they say they love one another. The problem is that they argue a lot, and their arguments usually end badly.

Interestingly, even though Jack becomes quickly frustrated and easily irritated, he gives Jill credit for being honest. He says he’s never known anyone who is as honest as she is. She talks straight up, tells him what she’s feeling and thinking without holding back, and calls him out when she thinks he’s wrong. He is not used to this, and in a strange way he respects her for it.

Honesty is an essential feature in any relationship which is based on trust. But in the realm of close personal relationships, could your definition of honesty actually lead you in a direction that makes matters worse?

If you define honesty as speaking exactly what you’re thinking at all times, you might find yourself in some interesting spots. (Billy, don’t you love grandma’s turnip casserole?)

If you define honesty as always expressing your opinion about another person, you might also find yourself in a pickle.

Honesty has nothing to do with expressing beliefs, thoughts, opinions, judgments, or evaluations. What we think, believe, and the conclusions we’ve arrived at have nothing to do with truth or honesty. They are merely our thoughts. Honesty goes much deeper.

Honesty consists of the courage to admit one’s shortcomings, to express one’s emotions and to be open, vulnerable and transparent, trusting that the other person will not take advantage of that.

Working with countless couples and individuals has demonstrated that all too many people have unhelpful ideas about honesty. They’re unhappy and can’t figure out why, and they never stop to consider whether something in their belief system could be the cause of their problems.

If you are experiencing individual or relationship troubles, and if this article speaks to you, please don’t hesitate to reach out for a free consultation. The phone number is 219-309-3928.